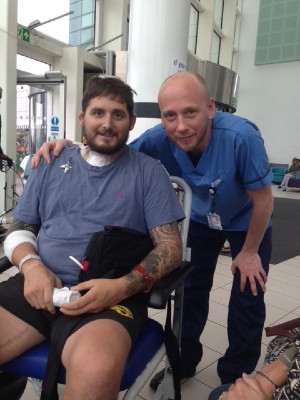 In 2014, Rhys had the surgery – it was carried out by three leading heart surgeons and the LVAD pump was fitted after a grueling 14 hours in surgery. Rhys didn’t wake up for 2 weeks post-op. When he came to he was presented with his new way of living- a battery-powered half-man-half-machine. He struggled to come to terms with his new reality and loss of identity, causing his mental health to deteriorate rapidly. The trauma Rhys suffered over these years around his health led him to a battle with alcohol addiction.

He drank heavily, living life so recklessly that he nearly died countless times, primarily due to the fact that his mechanical heart is battery powered and requires Rhys to plug himself into the electricity mains at night to recharge the batteries. However, in his drunken stupor, he would forget to charge his batteries or take spares with him, meaning he would literally be seconds away from death on an almost weekly occurrence.